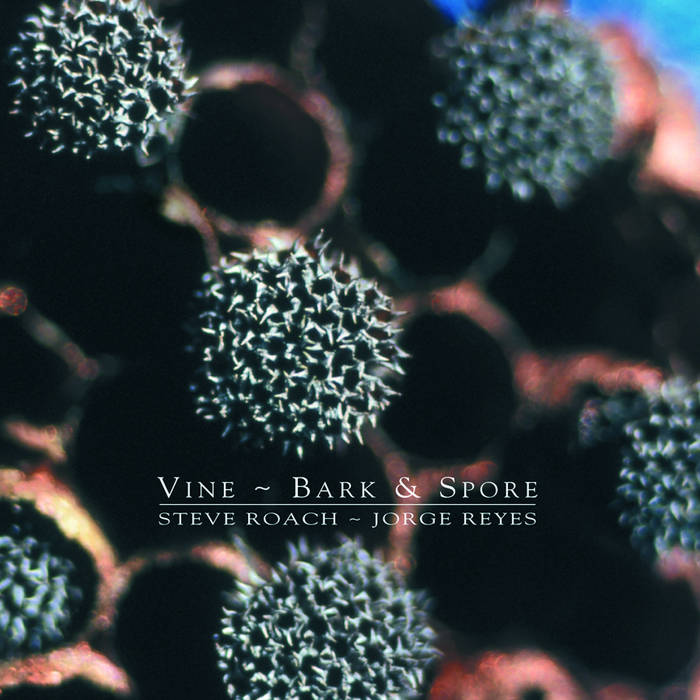 rikm "Vine, Bark, and Spore" is a fully realized creation of aural space, a musical voyage that transports the listener to a richly textured sonic environment and immerses them in all of it's wonder. Beautiful and evocative, this is one of my most favorite of Roach's releases...

Frank Inzan Owen (Hidden Mountain) One of my all-time favorite ambient recordings. Initiatory in its vibration, ending on a heart-opening if not heart-panging note. Haunting. Favorite track: Gone From Here.

Portis One of my favorite tribal-themed Roach releases. Reyes adds an environmental and perhaps a shamanistic flair to the proceedings. Atmospheric. Essential. Favorite track: Sorcerer's Temple.

Spicygod Years back I got this album as a gift from a friend. And wauw this universe really is fabolous. The variaty in intensity on this album is so great. I luv Gone from here the most, this really make me float away.

The music is the medicine...
VINE ~ BARK & SPORE captures a pure, organic sound that is rich with a potent magical atmosphere. The remote and mysterious locations deep in Mexico's historic landscape, as well as the hallucinogenic terrain of the Sonoran desert in Southern Arizona, provide the ground where this music takes place. The musical elixir was created from a surreal blending of acoustic and electronic instruments, along with voice and location recordings. With strong shamanic undercurrents, it creates an opening to step through time into the mythic worlds of the in-between. VINE ~ BARK & SPORE offers music as medicine for the soul. The music of Roach and Reyes acts as a transmitter of the attitudes that ancient cultures had towards music and the spiritual aspects of life, while merging with the currents of today.

The Ambient music genre called "Techno-Tribal" is based on an oxymoron: the combination of sophisticated electronics with the earthy, organic sounds of so-called primitive, tribal cultures. On the surface they have nothing in common...what's going on here?

The trail was blazed by STEVE ROACH in the late 1980s, after a life-changing trip to the Australian outback, where he encountered the artifacts and instruments of the aborigines. The resulting album "Dreamtime Return" is one of the foundation stones of the genre.

Of course, anthropologists and ethnologists had been collecting music from native cultures for years; Oriental music had strongly influenced the evolution of European music in the late 19th and early 20th century, and Stravinsky had injected a dose of ethnic vitality into European classical music with "The Rite of Spring." But by the 1980s, electronic music had grown into several predictable styles: cool and mechanistic from the high-tech artists; warm and melodic from the romantics; ethereal, atmospheric, sometimes dark, dissonant and strange, from the Ambient composers.

Roach, and those who followed him, forged a new connection between electronic soundscapes and elemental musics rooted in the earthy rhythms of drums, rattles and ancient instruments like the didgeridoo, the sounds of insects, animals, and nature itself. The combination 'grounded' electronic music in the earth and in traditional acoustics, with a sound that looked backward and forward at the same time, and gave electronic music a new kind of vitality.

Today, techno-tribal is an established style on the world's map of electronic music, a fusion of ancient and contemporary that complement each other.

This ambient collaboration between Roach and Reyes proves that "the music is the medicine".

Utilizing passive electronic textures (like whispering tonal hints) and distant ethnic percussives (which never take an overt presence) and vocal chants (resounding with a cavernous air) and ethereal woodwinds, Roach and Reyes generate atmospheric tapestries of sound that float like a hazy mist over a morning-lit clearing deep in some forest valley.

The tracks begin soft, meticulously passing into haunting auralscapes before other aspects arrive to generate a relaxed melodic sense to the aerial caldron of sighing harmonics. Although no domineering rhythm surfaces, the music is far from atonal, possessing seductive qualities amidst the tonal flow.

There is a distinct tidal mood to this music, creating an aural beach with low waves that creep unnoticed over the higher ground, immersing the land in currents of emotional ambiguity.

With the soft hint of tribal influences skittering through the music, these soundscapes conjure the mood of dark caves, ancient woods, and sorcerer's temples. The use of stirred water sounds adds an eerie touch to the pieces, evoking holistic pools where bathe the mystics before commencing their spells.