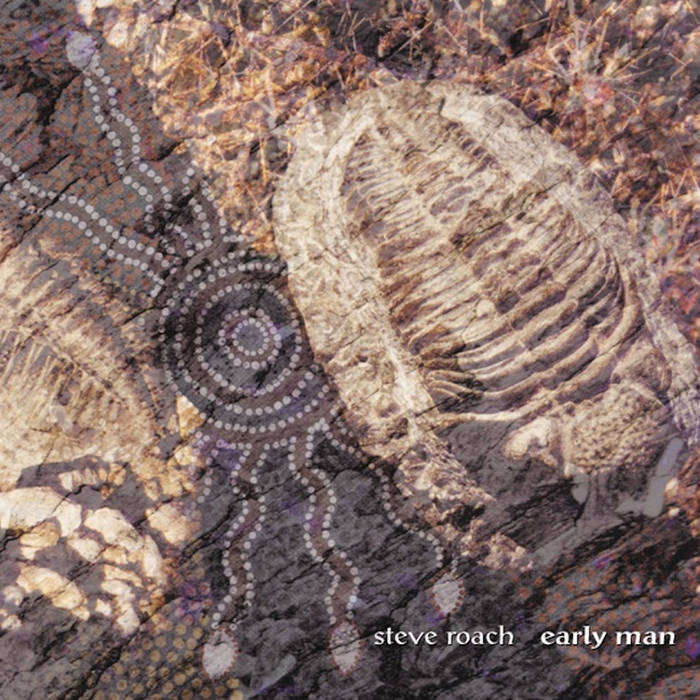 d8p Steve Roach introduced me to the genre when I was a small boy. Since then it is my sancuary. Favorite track: Slow Disolve.

Wes Moynihan One of Steve Roach's most atmospheric works, comprising of mostly beatless textures infused with subtle environmental sounds that creep in at the margins. Where there is percussion, it's used sparingly and compliments well this exquisite soundscape. Favorite track: Early Man.

yeahsee This is one of my favorites. I’ve had the 2 cd second issuing for a long time. Glad to have it here. Favorite track: Walking Upright.

Darlene All of these tracks are just so deeply dark, primordial and evocative just like I like them. Every one is great and some of Steve's best if you like 'em dark Favorite track: Walking Upright II.

This 2001 ground breaking primordial ambient master piece is now at name your price plus the 2 CD is on sale.
When first released this genre bending EARLY MAN brings into form an ancient landscape of bubbling pools and steamy marshlands, verdant arroyos and monolithic rock formations.

Cave paintings and ancient ancestral memories come to life in reveries of evolutionary magic. Capturing a day in the life of early man the accolades from press, listeners and artists alike all tell that EARLY MAN belongs to an ancient world all is own.

The concept of the second disk - Early Man Decomposed. Starting with Slow Dissolve, the experience is the pieces of disk one being excavated a few thousand years later where the passage of time would reveal this completely “Decomposed” experience.


Note: Early Man disk one was originally released on Manifold Records and was presented in a collector’s edition where the CD was presented between to 2 plates of Slate.

The earth of a thousand centuries ago was a plateau upon which primitive man followed his instinct to survive. Only the fossilized remains bear witness to man's fitful evolution from foraging primate to thinking beast. With last year's unique, single-disc limited edition of EARLY MAN, sandwiched between two weighty slabs of slate, Steve Roach took the fossil record and digitized it, creating an aural experience that is his most transporting to date.

Listening to EARLY MAN, now expanded to two discs, is like putting your ear to the wall of a prehistoric cave. Roach peels away layers of sound as an archeologist peels away layers of history. He's excavated and sifted and removed certain frequencies, compelling the listener to press his ear ever tighter against the stone, until finally physics surrender to the realm of dreams and memory and the listener passes through.

Floating layers of synth marked by intermittent passages of percussion reveal a sonic resonance rife with ancient wonders and primordial mysteries. By the second track of the first disc, full immersion replaces passive listening and one is allowed to luxuriate in a truly sublime exploration.

Initially surfacing as a limited-edition one-disc release in late 2000, each copy strikingly packaged between two slabs of slate, EARLY MAN became Roach's first major release of 2001 in an expanded two-disc format. The second disc consists of a "decomposed" version of the first, revisiting that material with an ear to more evanescent, mysterious ends, while the full release as a whole deserves note for its artwork, fusing prehistory with technology.

As a whole, EARLY MAN is Roach's sonic portrait of a distant ancestor to quote his own words, "one lone wandering early man" and the titles of the songs, as well as their respective energies, capture elements of this figure's life. Roach's abilities to create deep, moving electronic/acoustic compositions light years from the bathos of new age banality have long been clear, but EARLY MAN not merely reconfirms this, it makes it paramount.

The sheer depth of detail on both discs is both an audiophilic delight and an artistic triumph. The constantly evolving collage of sounds introducing new rhythms and sonic flow, suddenly stopping and starting when least expected, the use of echo as an instrument makes for fascinating listening.

The title track, at nearly 30 minutes the longest individual piece on both discs, is a slow, entrancing number initially revolving around a gentle, skittering rhythm and central guitar/keyboard melody before simultaneously stripping back part of that while introducing new instruments and themes.

The decomposed second disc pitches itself toward dark ambience more than once, with electronic distortion and near-empty arrangements setting the low, murky tone at many points. A unique, gripping style of grace and mood in a genre too many easily dismiss.