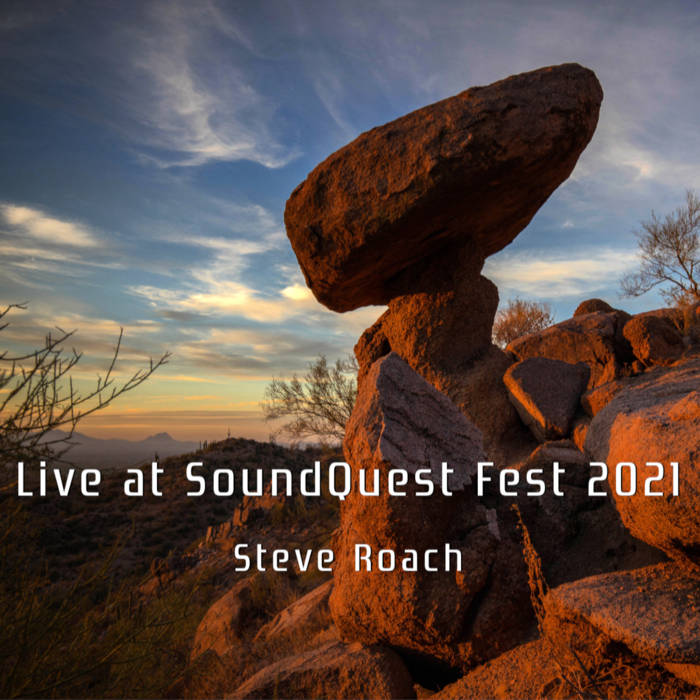 pileated31 Otherworldly, deep, and mysterious throughout all of its undulating quiet and more rhythmic passages. Floating, uniquely reimagined echoes and whispers of "Mercurius" and other prior releases. Another impressive and immersive musical journey from Steve. Thanks.

petco The whole album/presentation is other worldly and like most of this works. Anyone who appreciates him will remember this Fest. It culminated an incredible visual/listening experience.

THE CALL OF THE QUEST!

This empowered moment in time captures a performance that stands among one of the finest from Steve's live history. Knowing that a worldwide audience would be joining in on this performance from Steve's Baja, Arizona Timeroom studio added to the feelings infused within this extraordinary recording.

From the majestic opening performed on the Moog One, moving into the deep end of emotion and longing, a spiraling universe is woven in ways that transcend what might be considered possible in a live electronic performance. The set captured much of how Steve works in the studio: a starting map is composed, and from that point the trajectory constantly evolves as the moment calls out. The constant carving, mixing and spontaneous composition merge into an entrancing slipstream presented on this recording, just as it occurred in four movments.

SoundQuest Fest was first experienced and produced by Steve in 2010 as a live festival in Tucson, Arizona. Picking up from there, the 2021 version united a worldwide gathering of artists and audience members for an online streaming event. It was a groundbreaking moment for the ambient music genre, with a continuous three-day flow of streaming performances from international artists, audio-video wonder worlds, ambient VJ sets, interviews, music videos and deep immersion zones. The full set can be watched at www.youtube.com/c/SteveRoachOfficial.


All the SoundQuest Fest performances can be experienced at
SteveRoachOffical - YouTube