KAIROS - The Meeting of Time and Destiny 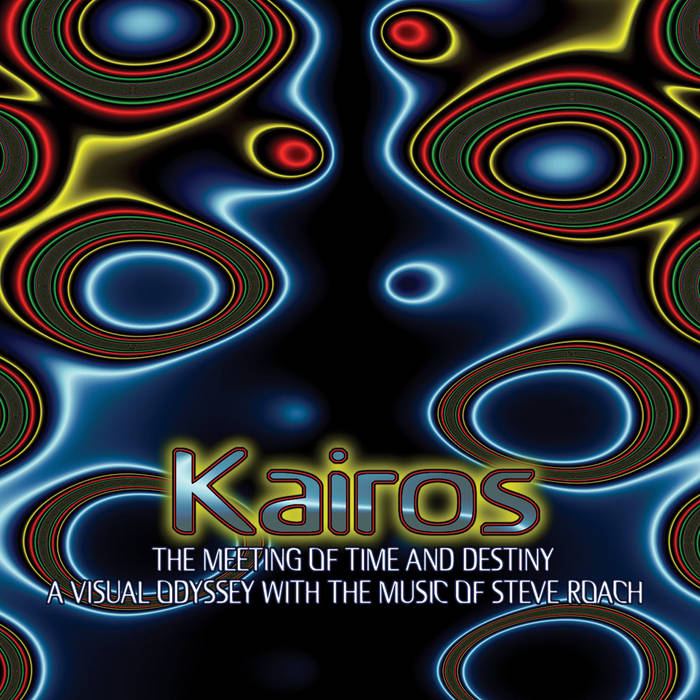 Thomas Voldset Wonderful release from a great era. Reminds me a bit of the great live album All Is Now, which was one of the first Steve Roach albums I bought. Favorite track: Lifeforming.

mysticwolf75 I bought the CD/DVD combo back when it was first released in 2006 - a perfect compliment to the Time of the Earth DVD.

rikm "Kairos" has long been one of my favorite albums by Steve Roach, an analog synth extravaganza that ebbs and flows through vast aural soundscapes, leading the listener on an epic sonic journey over the course of it's 74 minute length. To me, it's Roach at his best, his most impressive and most magical, definitely the album of his that I come back to the most.

This is the complete soundtrack to the The KAIROS DVD - a dynamic flow of visual wonder worlds created by five master light, film, and digital artists in collaboration with Steve. Drawing from a spectrum of visual techniques -- luminous organic analog light forms, dramatic Earth cinematography, cell-like computer animation -- micro and macro worlds join in a mind-expanding symbiotic flow between sound and visuals. Creation of the visuals evolved alongside the music over several years.
The DVD and CD in a beautiful DVD long box Digipack

The soundtrack, shaped to the images, was created in the studio with the dynamic understanding that comes from taking it "out there" on the edge in the live setting. This live interaction with the visuals in many live concerts helped to evolve the music and visual blend even further as it was being produced.
The soundtrack is a blend of elements drawn from Steve's recorded and pieces created for this soundtrack.

Kairos
by Johnny Black, Back On the Tracks
September 2006

A wealth of new releases is flowing from Steve Roach this year but, pleasingly, the increased quantity hasn't triggered any reduction in quality.

KAIROS is a particularly ambitious project, packaged in a lush oblong triptych-style fold-out case. The case includes two versions of the music: a standard audio CD running to over 73 minutes and a lavish DVD presentation running about one minute longer, not including bonus material.

The audio CD alone, being a remarkably varied set of eight pieces, would more than satisfy most Roach aficionados, but the music takes on a whole new dimension when played as a DVD. Roach has worked with eight different visual artists, each one contributing a very different visual presentation designed to enhance the music. The sequence opens with "Soul's Time", in which a relatively naturalistic collage of film-maker Steve Lazur's electronically treated desert landscape images accompanies Roach's majestically spacious drones. The combination delivers much the same feel as the ground-breaking 1983 movie Koyannisqaatsi did for the music of Philip Glass, except that Roach's compositions seem to me to work rather better than Glass's in this kind of context.

"Soul's Time" eventually morphs aurally and visually into "Core Regeneration", a more kinetic piece of music set to a hypnotic drum loop and partnered with an ever-changing display of liquid-like patterns, created by Steven Rooke, not unlike the colours and shapes produced when petrol mixes with water. When I first received this DVD, I started watching it on my living room TV with the intention of casually flipping through to get an overall impression of what it might be like but, instead, to my surprise and delight, I found myself riveted to the screen, hypnotized by what I was seeing and hearing.

After a brief diversion into the darkest depth of the ocean to swim a while with exquisite, diaphanous, slo-mo marine creatures, we move on to "Resonation Portal", a huge echoing, resonant soundscape matched to some quite astonishing computer visuals of speedily unfolding geometric meshes and grids, all with a solid 3-D metallic sheen. The combination shouldn't work, because the visuals are much more accelerated than the music but, amazingly, the effect is mesmerizing. This is the track that made me realize I had to see this DVD on a bigger screen so, a couple of days after my initial TV viewing, I took it to my good friend Dave Watterson's private cinema in his basement, where four of us sat pretty much gobsmacked for over an hour.

On the big screen the floating, drifting smokey sequences of "Lifeforming", in rich purple and opalescent hues, become totally absorbing, and blend perfectly with the music which has a feeling of rolling slowly over gently undulating terrain by night. Words, of course, can never quite do justice to any art form which, as this does, requires total absorption and concentration on the part of the viewer, so if my descriptions of these first few tracks have whetted your appetite in any way, rest assured that the real thing is much more intense and stimulating. It would be pointless of me to try to describe the final few tracks and, besides, it's better that you should experience them without me putting my limited interpretation on them.

Suffice to say that, for a DVD with no "plot" as such, and in which nothing really happens, KAIROS is one of the most enjoyable cinematic experiences I've ever had. I've never been in a total immersion tank, but I'd imagine it feels very much like watching this stuff.