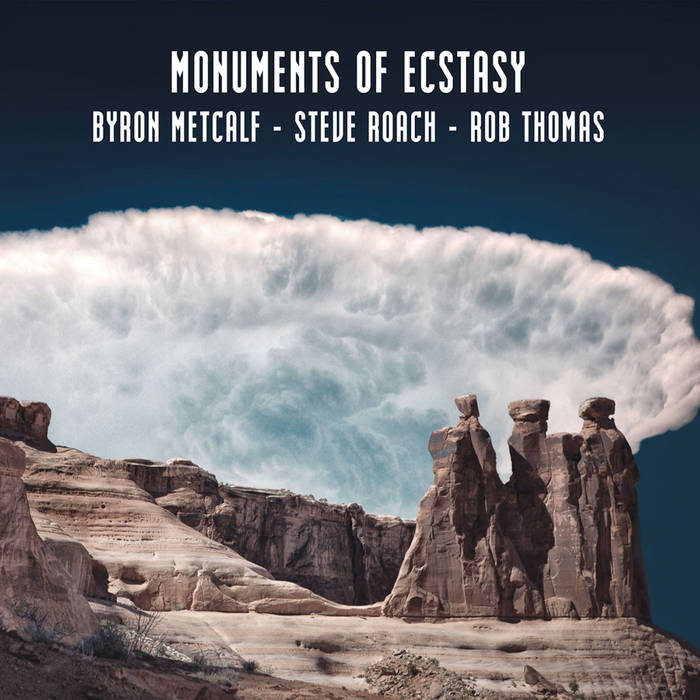 C1•C3C11 I listened to the first two minutes and just had to make it my own. Music like this fits my creative environment perfectly.

The visionary tribal-ambient trio of Byron Metcalf, Steve Roach & Rob Thomas opens a portal into an expanded state of being. Monuments of Ecstasy contains six impeccably crafted pieces of modern-tribal magic; the visceral power of sound and rhythm work to activate a body-centered passion and life-force arousal. Byron’s drums and percussion fuse with Steve’s hybrid grooves, array of analog modular, virtual analog synths and mixing enhancements; Rob’s serpentine didgeridoo weaves aboriginal textures and otherworldly voices, adding ancient layers to the trio’s flows and soundscapes. The result are majestic and powerful formations that rise up from the earth in an ever-evolving organic listening experience.

Driven by a constant undercurrent of fluid percussive pulses, the music induces a sense of hyper-perception on all levels – from cellular to celebration. This is akin to the expanded level of awareness achieved throughout time by seekers worldwide. The entire body becomes a receptor-center for these primal forms of rhythmic momentum and emotive textures. A myriad of interwoven patterns, accentuated by state of the art recording, mixing and mastering, combine to transport the listener into a numinous dimension of energy, expansion and bliss – the very definition of ecstasy.

Activating an euphoric state of body-mind-spirit awareness, the tracks develop and emerge as they reveal their intensity and power. Just like the massive, magnificent monuments that grace the album cover, these pieces inspire a breathtaking state of awe. With an underlying power and strength, the expansiveness of these Monuments of Ecstasy await…

Byron Metcalf is an award-winning professional musician and recording artist who also holds a Ph.D. in transpersonal psychology, a master’s degree in counseling psychology and is the creator of The Shaman’s Heart Program – The Path of Authentic Power, Purpose & Presence. Byron’s unique understanding of the healing and transformative power of expanded states of consciousness infuses his music and drumming – allowing listeners to easily access transcendent and mystical realms of experience.

Steve Roach helped pioneer the evolution of ambient/electronic music, shaping it into what it is today. An extremely prolific composer with a discography of over 100 albums since his 1982 debut, his landmark recordings include Structures from Silence, Dreamtime Return, Origins and his most recent The Delicate Forever. They all draw from a unique ground, a primordial recognition of sound that creates a bridge out of everyday reality to emotive, cinematic, soul-stirring depths encompassing the wonder and awe of life’s ebb and flow.

Rob Thomas is a master didgeridoo player and founding member of the legendary Inlakesh, whose music was used in several films throughout the 90s including the IMAX film “Sacred Planet.” Their recording The Gathering is a breakthrough shamanic-trance album that inspired a generation of didgeridoo enthusiasts. From his mountain top base in the Smokey Mountains of western North Carolina, he travels across the U.S. bringing didgeridoo music to schools with a program that raises cultural, environmental & global awareness in today’s youth.