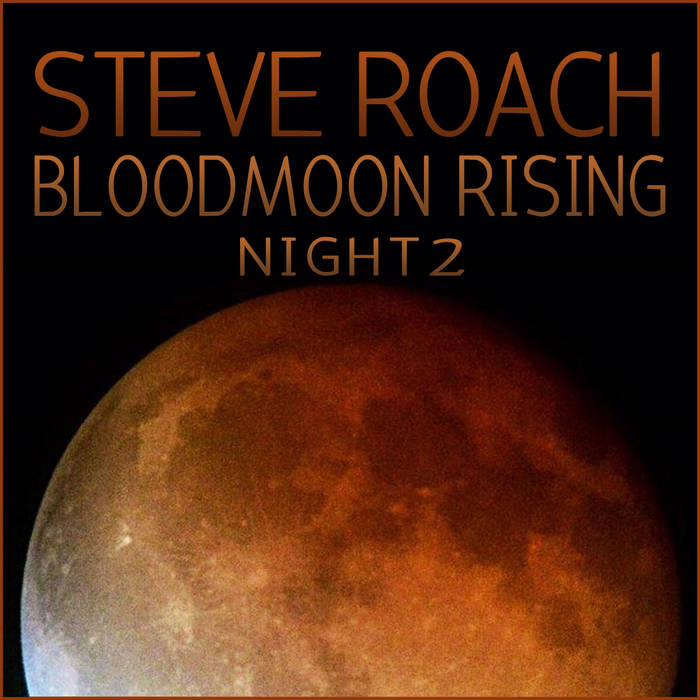 Garret Moore Maestro Roach is the creator of my most sacred muse music. I've been a devoted fan since the 1980's when I heard his work on Hearts of Space Radio. I'm sure this is what Heaven will sound like for me.

2015 CD mastered Version.
This piece was created in these last few days leading up to the Blood Moon night of October 8th. So much of my work is born from the deep end of the night immersion. Staying aware of the moons many phases, from full to new has always been a part of my creative undercurrent so the opportunity to acknowledge this moment in time made this piece flow forth with out a question. Tuning into this Blood Moon feeling mixed with that sense of the seasons change in the air right now is inside this piece for me, and now I quietly offer it up to the moon and to you in this more spontaneous way only through Bandcamp.
All my best
Steve
Evening of Oct 7

Oct 16th 2014 update from Steve:
BLOODMOON RETURN, the big picture…
A tremendous thank you for your overwhelming response to the "Bloodmoon Rising" piece. The spontaneous expression and immediate sharing was, like that night, a unique and inspiring experience. We will do it again! Mark your calendar for April 4th 2015. This is the date for the next audio chapter in the Bloodmoon Rising Tetra, with a new piece created in the days leading up to going live that evening on Bandcamp. Then on September 28 2015, the final piece in the Bloodmoon Tetra cycle will arrive. (The first Blood moon in this cycle was on 4 15 2014, the piece for this night was recorded but not released) On the night of the Sept 28th 2015 eclipse, this fourth piece will also be up at Bandcamp.


The complete 4-CD 1000-copy limited edition signed and numbered Eco Wallet is now available on Timeroom Editions This presents all four 70 minute Bloodmoon Rising pieces together in a tour de force of deep ambient noir, available in a beautiful 4-CD presentation and on various download options.

The 4 CD Bloodmoon Rising can be obtained a compete download set.
steveroach.bandcamp.com/album/bloodmoon-rising-complete-4-cd-set
Also each night is available as a single download as well.