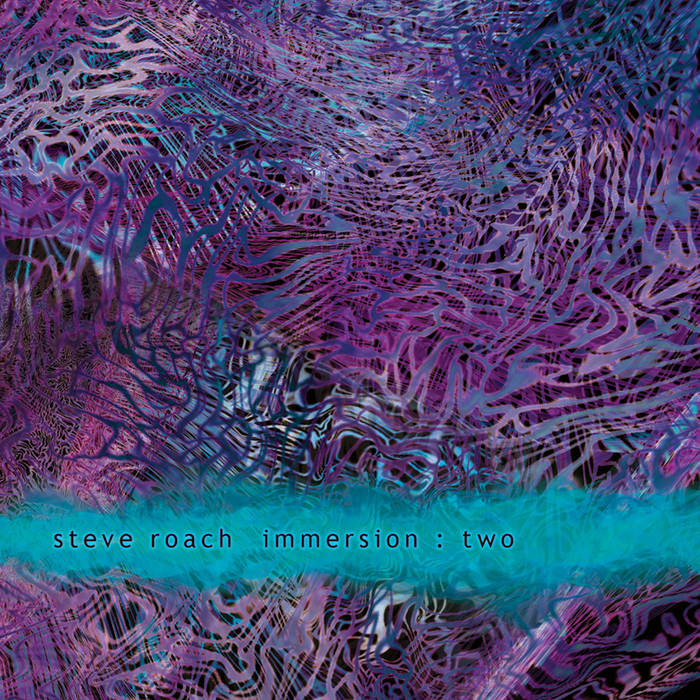 Immerse Thyself...The second in an ongoing series of atmospheric zones by master sound painter Steve Roach, IMMERSION: TWO presents a subtle shift from the luminous steady state harmonic current of IMMERSION: ONE. On this 73 minute, long-form soundscape, a sinuous weblike mist seems to emanate from the speakers. Mysterious yet calm and introspective, this is the perfect sound environment for the deeper hours after midnight, or anytime a quiet, engulfing audio landscape is desired. If Nag Champa or Sandalwood incense had a sound, this might be it.

"This continuous zone, titled 'Artifact Ghost', has to be one of my favorites for late-night activity and sleeping. For years I kept coming back to it, as it always feels alive and never-ending, never beginning. This piece was a big part of the inspiration to start the Immersion series. An 8-minute excerpt from the 90-minute original was heard on TEXTURE MAPS, and after this glimpse of the ghost I was struck by how many requests there were for a long-form version.

"Perceptive ears will hear shades of this ephemeral zone as far back as ARTIFACTS, where I wove it into the fabric under the tribal-based grooves. Its smoky presence paid a visit on CAVERN OF SIRENS as well. If you were at any of my concerts in the mid to late 90's, there's a good chance you heard this piece setting the space before my performance. On IMMERSION: TWO I took the opportunity to live with this zone again, to fine-tune and melt the 'Artifact Ghost' even more, creating subtle movements and adding nearly subliminal openings along the way.

I will confess to have something of a predilection for the Immersion series. IMMERSION: ONE looped for nine straight hours during my daughter's birth and was the perfect accompaniment to the event, bringing palpable quiet and ease in the wake of labor pains and providing a soft, breathy aural cushion for the little girl's arrival. And so I expected quite a bit from its followup. No need to worry. IMMERSION: TWO takes the deep-drift mantle laid down by its predecessor and moves the form and the series forward. The sole long-form piece, the aptly titled "Artifact Ghost", moves through its 73 minutes like a half-glimpsed parade of wandering spirits or the etherea of fading dreams that float around us in half-waking moments. The music affects the space around the listener sonically and temporally; time slows almost to the point of stopping and moments are lost, given over to the flow and the warmth of Roach's textures. The air shifts and calms in its wake, and perception changes. An awareness of spirit rises as the listener is lulled ever downward into the self in a sort of coaxed meditation. Given the continuous play called for on the CD's inside cover, IMMERSION: TWO stands a fair chance of inducing an out-of-body experience as the listener gives in to the urge to follow Roach's sonic ghosts as they glide and dance.

Includes the inner cosmos: A sphere which leaks from the speakers into the room.

Developments in electronic music in the late 20th century have introduced notable changes in musical formats. The "song" now competes with the "track", a solitary "sound" can constitute an entire "score" and the notion of a "composition" can be replaced with the idea of a "zone". On IMMERSION: TWO, Steve Roach comes close to unifying the latter two terms into a single symbiotic entity with the potential of tearing these all too often superficial borders down for good.

He may well be just the right person for the job. When Roach started co-defining a genre which, in its first incarnation, had sprung from the quill and imagination of Brian Eno, he was regarded as a pioneer and his music as "progressive" (whatever that is worth in the music business) �- a stark contrast with the contemporary perception of Ambient as music for Narcoleptics and Dark Ambient as lullabies for Gothics.

Obviously, Roach had the tremendous advantage of approaching the idea of Ambient from the viewpoint of an open-minded composer and trained musician, instead of from the angle of a sound artist. His ideology, if that word allows for enough freedom, seemed to lie in the recognition that there was a physical logic in the traditional and proven system of harmony, melody and structure and that art needed to take this into account to achieve the greatest effect instead of replacing it exclusively with timbre.

He therefore aimed at skillfully wiping out all traces of his involvement in their creative process, his albums often appearing exercises in externalizing their composer one can be sure that there is just as much surprise and astonishment on the side of the audience as there is with Roach himself upon hearing the final result. It is the very fact that the music always sounds as though it could be decoded, its rationale still seemingly within reach of our logic, which awards its impenetrability additional depth and keeps the mind working even when it has long surrendered to the textural aspect of a piece.

In this respect, the album at hand may well be the best example of this technique. Steve Roach, after all, immersed himself in these seventy-three minutes repeatedly for over a decade, experiencing it as an outsider, while continuing to work on its structure. The "track" appeared as a backing to more rhythmic work; an eight-minute edit appeared on a collection of lost tracks and a looped version was used to get fans in the mood in anticipation of live appearances. "This continuous zone, titled 'Artifact Ghost', has to be one of my favorites for late-night activity and sleeping", Roach revealed in his notes to IMMERSION: TWO. "For years I kept coming back to it, as it always feels alive and never-ending, never beginning."

Some may find it narcissistic for an artist to appreciate his own work in this way, but in this case there is a mistaken argumentation behind that point of view. For a track like "Artifact Ghost" to work, its compositional method can no longer just consist of placing notes on an imaginary scale. The composer really needs to live with the music as if it were part of his environment. Only if he, too, reacts and responds to the "zone" and starts using it for its intended purpose can he be sure that it has fulfilled its purpose.

This care shows and turns these surreal chord progressions, which meet at intervals to rise up like flames, into a sphere which leaks from the speakers into the room, enveloping everything in an air of continuous expectation and a nocturnal light. Something about this music reacts with the chemistry of the space around you -- and turns it into an instantaneous installation right from the very first moment.

And yet, there is more. Paradoxically, on a long enough scale, some of the smallest events can be magnified by the lens of time. Here too, the inclusion of barely noticeable layers, sometimes merely playing softly alongside already existing patterns, keeps the listener guessing whether it's all just one gigantic repetition or an intricately planned and mapped-out effort. At around the 22-minute mark, a sweeping sound comes blowing over the soundscape like a hurricane, without ever fully brushing it aside. And in the final minutes, Roach cools "Artifact Ghost" down to an almost static drone, existing solely as a memory of what preceded it.