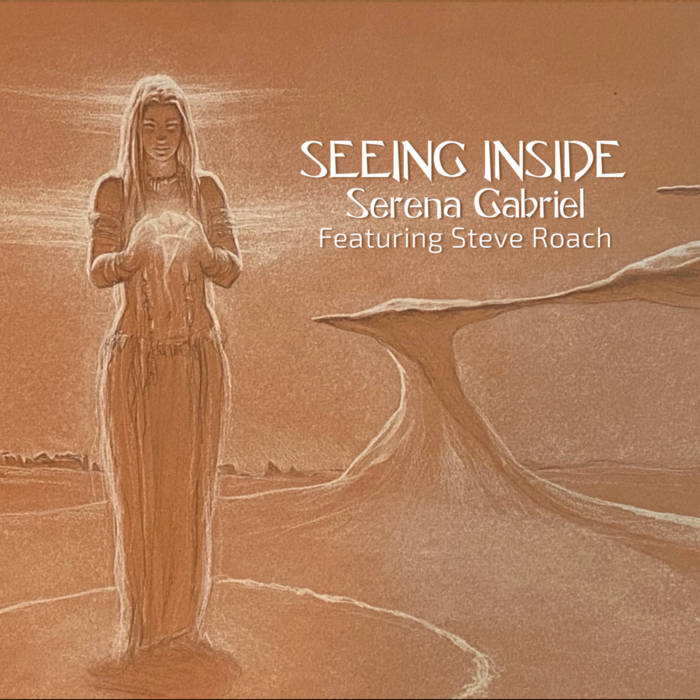 shrackus it's Amazing. thank u

Gabriel Rojo Keeps what was great from the previous ones and develops it in further, more elaborte directions. Favorite track: The Familiar.

bigpolarbear A very deep dive into an immersive world. I am enjoying it more each time I hear it. Favorite track: Seeing Inside.

delightedcrab This feels more Serena Gabriel than Steve Roach to me. Hauntingly beautiful melodies. At points, it reminded me of Constance Demby, though without the sadness that I often feel listening to Demby's music. Highly recommended. Favorite track: Within.

Andrew Superb and sublime. Serena is continuing to amaze with this album.
Favorite track: Within.

Look deep within and experience the ephemeral, mesmerizing and enchanting music of mystic vocalist/multi-instrumentalist Serena Gabriel. Her evocative voice, the alchemical combination of harmonium, ancient instruments and synthesizers, along with producer Steve Roach’s luminous sonic offerings, exudes a silken atmosphere, embracing a potent elixir of suspended sonorous electro-acoustic contemplations. This music lives at the threshold where sonic enchantments and bewitching human voice weave an alluring tapestry that evokes archetypal stories of shadowy descent, transformation and an integrated return.

Speaking to the depth of feeling in her work, Serena states, “Creating music is a vital part of my personal journey of growth and transformation. Whether I am toning, chanting, performing or immersed in the studio, the space opens for me to face both my vulnerabilities and strengths. When in the deepest part of the creative process and self reflection, each piece becomes my teacher as it unfolds, showing me how to bloom into more love, compassion and acceptance of myself and others while broadening my sense of the beauty and mystery of life.”

The emotive, shapeshifting atmospherics, acoustic world instruments, and captivating vocals bring to mind the richness of cultures and eras throughout time. The 6 tracks are a courageous sonic odyssey into the internal landscape, encouraging expanded understanding. Beginning with Serena’s celebrated 2020 Inanna’s Dream, Seeing Inside is the next chapter of her elemental and provocative ambient revealings.

Recorded at Ancient Waves and the Timehouse - Tucson and Baja Arizona

Produced and Mixed at the Timehouse by Steve Roach

Review by Chuck van Zyl Stars End radio show
Exploring relationships between the electronic and the acoustic, Serena Gabriel works again with producer and collaborator Steve Roach on Seeing Inside (72"12"), their creation of atmosphere and constant sonic motion. In rolling synthetic waves and tender ethereal textures they conjure a beautiful inward space. Softer sounds prevail, as emanations of world instruments, vocals and keyboards are pushed into ever more thoughtful realms. With its slow procession of rising and receding tones, mingling with a most ethereal voice, Seeing Inside seems more a ceremony of sacred sounds than a conventionally composed body of music. From the deliberate pacing, and a sense of consonance over the churning electronic wash, to the issue of warm rounded timbres, these distinct characteristics resolve into an experience so captivating. Classic synthesizer sounds are layered among swelling drones and shimmering accents. In a swirling mist of ever-changing tonality, we progress from areas of darkness to light. These reflective zones are meant to provide a state within which secret webs of knowledge may be revealed. Yet, in moving from one mood to the next, Seeing Inside never loses its sense of direction. In her vocalize style of wordless, emotionally charged expressions Gabriel directs listeners through idyllic nocturnes and compassionate laments. Her voice soars fluently above haunting synth arrangements and rumbling bass notes. Moving effortlessly across registers, she glides from exaltation to soft benediction, and on to that of something seemingly beyond human extent. Swirling amidst sources such as harmonium, lyre, wooden flutes, frame drum, and the earth tones of the didgeridoo, Seeing Inside unifies in a distinct condition best attended to with eyes closed. In such a state the transportive qualities of this work may be fully felt - and its truth heard.