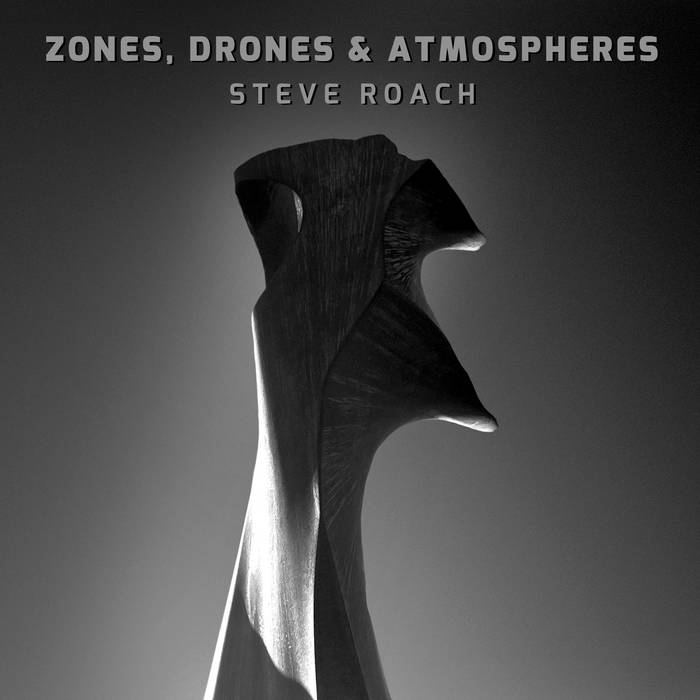 2020Guitarman This album will grow on you. Listen in headphones or earbuds. It will blow your mind. Steve has so many amazing textures and dimensions on this release. It's hard to pick a favorite track. Probably in his top 5, if there is such a thing.

Hugh Marchant Walking on air - the work of Mr. Roach is a part of what makes life worth living x
more...

out of time studio

Please note : The Digital edition of this release extends the experience to nearly three and a half hours. The CD is pieces 1-7.

The gently engulfing interplay between the album’s nine (7 on the CD) pieces provides contrasts of shadow and light, shimmering beauty and alluring soundscapes stretched into infinity. The revealing of the music unfolds into stately sonic formations of hypnotic weavings, hazy atmospheric swirls and murmuring reverberations. Roach establishes each soundworld through engaging a multitude of techniques and hardware-based instruments with fluidity and grace.

Manifesting from the essential foundational DNA of ambient music, this is an album of elegant, deeply nuanced audio alchemy. The expansive minimalism reveals a shadowy and emotional spaciousness that meditates on the enduring essence and power of sound and our place in the center of it.

Created by Steve Roach at the Timehouse, Baja Arizona.

A subtle alternate mix of Neomorphic first appeared on the release Painting in the Dark. When building this release and experimenting with various track sequences this version of the piece felt like it had to live here in this flow.

Isolation Station was first heard in a shorter form on the release Texture Maps, for years I wanted to present its fully long formed realization as it appears here.

`Zones, Drones & Atmospheres` is an extensive opus that stretches the audience's ability to recalibrate sensitivity to time and space. Steve Roach has demonstrated, once again, his mastery of sonic persuasion by engaging our attention in deep, shifting states refracted into a glittering web of textural harmonies and toned-down sequences. The nearly 3.5 hour album proposes a musical descending into the core of our being, inward diving unveiling the transcendent power of solitude. This new immersive recording interweaves dark octaves and luminous resonances to express the paradoxical nature of the unfathomable mystery within us.

A feeling of time slowing to an almost stop arises while listening piece by piece, culminating with the final two long tracks where the music sounds timeless and unearthly but strangely intimate. The flow of sensations, emotions, thoughts are absorbed in soundwaves washing onto and dissolving in the invisible shore of awareness.

In times of turbulence, an occasional detaching from the social context can be healthy and rewarding. `Zones, Drones & Atmospheres` encourages inward-focused confinement that, pursued by choice, proves to be insightful and restorative.

Since the early 80s, Steve Roach has been releasing powerful ambient chronicles of the imagination, forward-looking minimalist music like no other before it, although his music has served as guidance and inspiration for many who came after.
Roach’s first release of 2022 offers a wellspring of expressive soundscapes that encompass all of what the title bluntly suggests: zones of alluring beauty and nuanced shades of light and darkness; drones that offer a persuasive vision that engulfs the listener completely; and atmospheres that shimmer and weave, swirling in hazy heady textures and opening out into the vast reaches of the cosmos.

Those familiar with his previous ambient works, both short and long form pieces, might not be too surprised by what’s on offer here, given that it all fits into Roach’s expected and expansive trajectory — dreamy sounds that meet the mysterious and cavernous reverberations of space that fit within no existing genre of music other than to say that its essence is explorative and, by virtue of its presentation, hypnotic.

The compact disc version contains seven evocative and mystical tracks of varying length, from the near-fifteen minute opener “The Living Space,” where the dark sky breathes freely as stars curiously light up the heavens with beautiful sonic artifacts, to the dense atmospheres and dark growling textures of “Immerse Indigo,” the disc's shortest track at six minutes. With “The Perfection of Solitude” one will hear deep electronic pulses across a gentle field of shaded atmospherics, while “Neomorphic” takes the listener on a guided journey through the depths of space, with subtle flashes of ancient tonal color driving the abstraction forward.

Downloaders will get a couple extra cuts that are not featured on the CD, the 73-minute “Submerged” and the near-hour-long “Isolation Station”; both are long-form pieces that immerse the listener in slow waves and shimmering cascades, meditations that are all but guaranteed to send one down the eternal spiral of slumber and beyond.